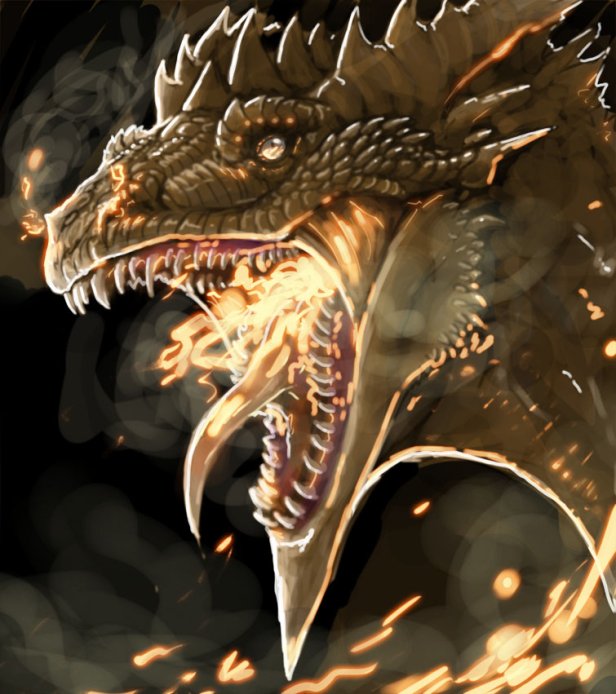 Sammy couldn’t believe he was going to die. How unbelievably humiliating.  Dave and the boys would never let this go if he came home from mage practice having a dragon death in his statistics – a death with a practice dragon no less.

The dragon shot a large gust of orange fire out and he easily dodged it, scrolling through his mental repertoire of spells – wondering which would be the best to disable the dragon. Before he could cast a small freezing spell, it shot another spurt of fire, but this time Sammy just about noticed wisps of purple through the hellish orange.

“Wha–” he started to say before realising he desperately needed to dodge the creature, or face endless humiliation at school. He concentrated and shot an ice blue spell at the dragon but, to his surprise, it retaliated a second later with another outburst of orange fire, this time with pronounced streaks of purple dancing through it.

Sammy was forced to dive behind a bush as he slowly realised it — this wasn’t a dragon. This was a drakon. Sammy almost passed out in fear because when drakons kill you, you stay dead. Like, forever.

Unlike dying to a dragon which means you spent an hour with the nurse and another hour at the ‘bathroom’ dreading going to your next class because only idiots lose to dragons – they’re the easiest monster to kill. Sammy  wasn’t sure what to do – he couldn’t tell his teacher because leaving the arena, while fighting a monster, was impossible.

The doors open only after one or more beings in the arena is dead-ish.

The only option was to fight — fight a drakon that heroes trained for years and years to battle; and yet many didn’t come out alive.

He stealthily poked his head around the bush he was hiding behind, and noticed the drakon had landed on the ground. He decided to jump at the opportunity and cast the most powerful spell he knew – one that he had not yet mastered but was the only one that stood a chance at beating the drakon.

Sammy closed his eyes and willed his energy to be directed  into his hand – the moderator of his magic.

Sammy tried it again and anyone watching would be wondering why Sammy was seemingly trying to fall asleep in the middle of the battlefield. Nothing happened.

The drakon picked him up and threw him across the battlefield.

Sammy was on fire for a second but skidding across the dirt floor put it out.

The fire in his body was gone and so was his fire to fight. He lay there as the drakon looked around in the sky, trying to find him. There was a small hole in the ground he could have climbed into. But Sammy did nothing, the weight of defeat bringing him down as he tried to internalize what was to come.

It was only this morning he was hoping there wouldn’t be cereal for breakfast, and meaning to talk to his roommate about the loud snoring from his bunk. It felt like forever ago; these insignificant decisions and actions that now seemed like a luxury.

It was a raccoon. Standing on the floor with a bit of magic sparkling in its little paws.

Sammy was too bewildered to speak. The raccoon rolled its eyes.

“Okay, I’m gonna break this down really small for ya, buddy. You cast a fire spell on me. My thunder power activates. I cast lightning on the drakon. You and me go about our day. Sounds good?”

Sammy’s autopilot was activated instantly and without any questions, he cast a fire spell at the raccoon.

“Oh wow. You didn’t question it at all. That’s a first,” the raccoon said, surprised.

It then  raised its small paws and extended its claws, its entire body crackling with electricity. It summoned a burst of lightning, a terrifying rod of electricity that came down from the sky, accompanied by a loud clap of thunder.

The drakon was hit with the lightning, and it fell to the ground with a loud thud. Sammy jumped out of the way as the drakon’s body fell on the spot he was standing.

“Th-thank you,” he said to the raccoon.

“No prob,” the raccoon said, rubbing its furry paws together.

“Do you…do you want me to take you as a pet? Or do you want to stay in the dry battlefield?”

“Nah, I like staying here. I like helping you heroes and getting your infinite thanks and  praise and stuff.”

“Wait so… when Randy said he beat the drakon, does he mean you helped him? Ooooh, I can’t wait to make fun of him for it,” Sammy said, his eyes lighting up.

This piece was written as part of Rashmi Bansal’s Short Story Writing Workshop.

5 thoughts on “Enter the Drakon”