Guest Story: The Flip Side – Part 2 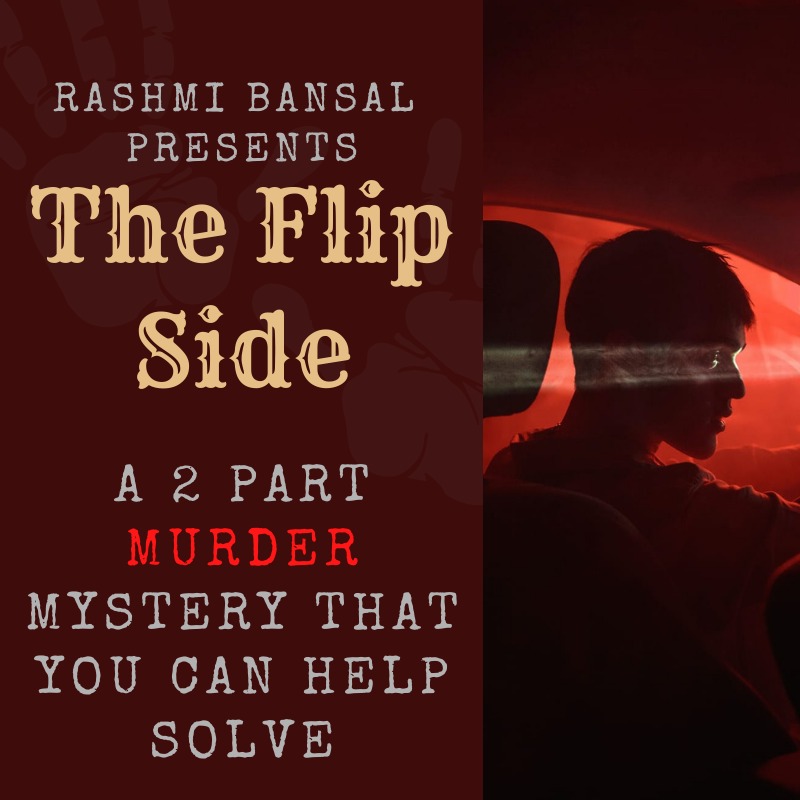 Inspector Devaki Pandit was a smart cop, something that brought out envy, and admiration in equal parts, amongst her colleagues. She secretly thought that it was a blessing that she wasn’t very attractive, although most of her male counterparts would have debated that theory. She was slim and of medium height and wore her hair short, more for sake of convenience than any sense of fashion.

Devaki took another long look at the interior of the car and then at the two men standing under the tree. The rain had stopped a while ago and the headlights of the police vans, combined with the torches, did a fair job of illuminating the scene of the incident.

Inspector Devaki walked towards the dead body and looked down at it. The old man lay on his back, his temple bloody, his expensive suit totally drenched. There was a large rock with blood on it, near the old man’s head.

Devaki bent down and had a closer look at the wound, there was freshly coagulated blood mingled with mud particles. She then noticed the dead man’s right hand – it was closed into a fist. She peered closer and saw dirt, and something else, between the clenched fingers. Inspector Devaki then turned her attention to the rock. She squatted down, and remained near the body for long minutes, before rising and approaching the two men.

“Tell me again, what happened, try not to omit any facts, howsoever trivial.”

The nephew spoke. “Well Madam, we were on our way home and I was driving , there was a business discussion that we needed to have at home so my friend Babloo also accompanied us.”

Dilip paused, and then continued.

“Uncle told me to stop the car as he wanted to urinate, so I stopped here.”

Inspector Devaki interjected, “But wasn’t it raining, and your house is just 15 minutes’ drive away?”

“Yes, but uncle said it was urgent, so I stopped,”

“Then, uncle walked that way and after a minute we heard a thudding sound. We rushed and saw uncle lying on the ground, face down. At first I thought he’d had a heart attack or something but when we turned him over, we saw the blood and realized that he had slipped and hit his head on the rock. We tried to give him water but he wasn’t conscious and after about 10 minutes, he stopped moving. We then called the police and ambulance.”

Inspector Devaki turned to Babloo and asked, “Do you have anything to add?”

Babloo shook his head, “No it happened exactly like that, I even tried to stop the bleeding with my handkerchief but it was of no use.”

Babloo held up a blood-soaked handkerchief.

Inspector Devaki Pandit nodded and looked around at the whole scene once more, she turned to the two men and said, “Well I have four questions that puzzle me. Since you were the only two on the scene at the time, maybe you can answer them>”

“First – when you had parked under this tree, why did your uncle walk to that spot 30 yards away in the open… when he could have just done his business on the other side of the tree?”

“Second – it was raining steadily at the time and your uncle was wearing a tailored, expensive suit.  So why didn’t he take his umbrella when he had one on the seat next to him?”

“Thirdly – Mr Babloo, I see that there is a small rip at the edge of your trouser pocket. It is freshly torn, and I see a thread of the same fabric clenched in the deceased’s hand – how did that happen?”

“Lastly – there are two sides to rocks, especially in the monsoon season. Gentlemen, the top side that is polished, washed clean because of the rain. And, the bottom side that is soiled because it lies partly embedded in the muck and dirt.

So can you tell me exactly how did Mr. Sampat Kumar fall that he struck his head on the bottom side of the rock?”

The challenge was: What clue did Inspector Devaki Pandit notice which clinched the case? Though none of you got it exactly right, I’m sure you enjoyed trying to solve it. Thank you for participating so enthusiastically!

Workshop is open to all. Those who’d like to attend may register here:
https://rashmibansal.in//crime-fiction-writing-workshop/